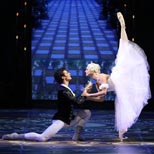 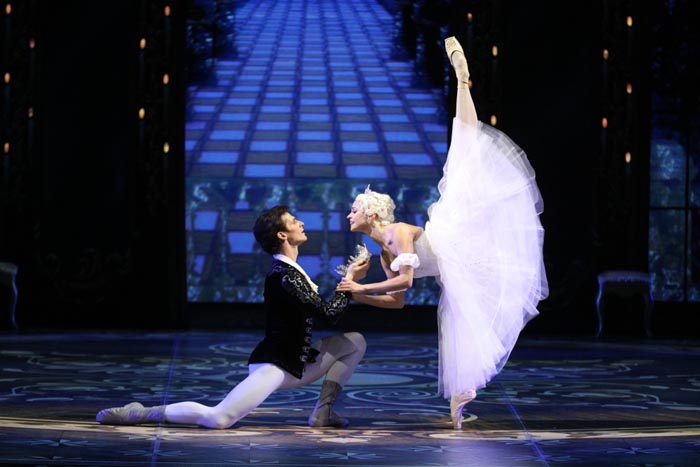 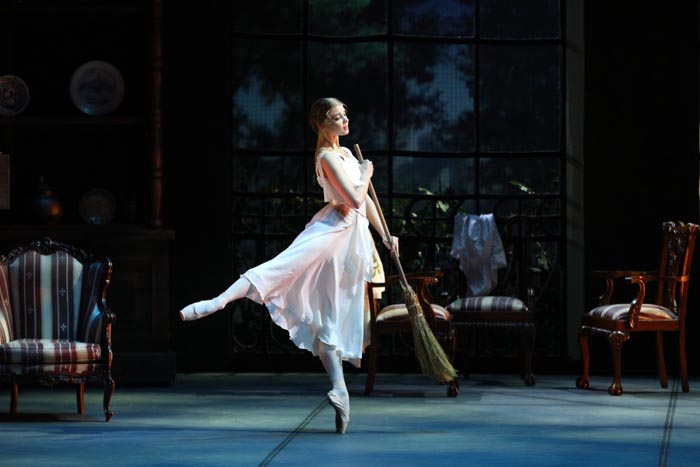 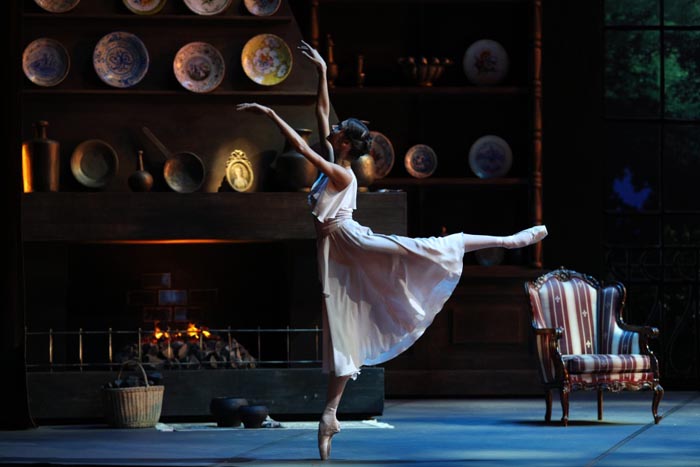 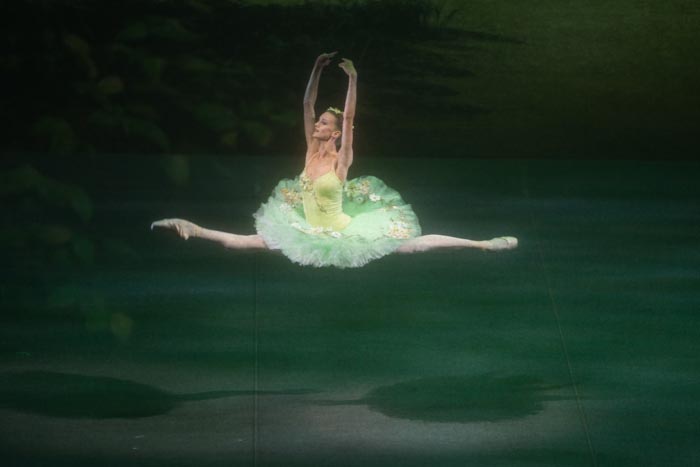 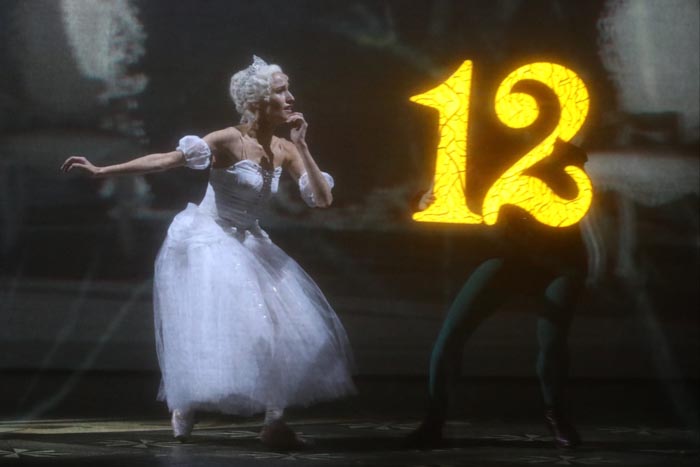 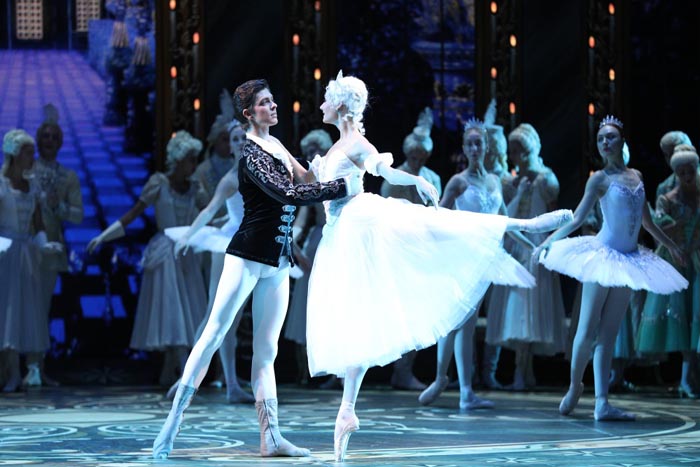 Libretto by Nikolay Volkov after the fairytale of the same name by Charles Perrault
Choreography by Rostislav Zakharov revived by Mikhail Messerer
Stage and Costume Design: Pyotr Williams

Premiere at the Mikhailovsky Theatre: 14 September 2017

A modern version of the classic play from 1945, resurrected in a style fit for a digital-age audience. This production’s calling card has become its successful marriage of lovely ballet from years gone by and modern stage technology. Visual computer effects peacefully coexist with traditional costumes and props. Rostislav Zakharov, to whom the premiere is dedicated in celebration of the 110th anniversary of his birth, described his production as „a song about the spring of human life, youth, happiness and dreams“. While working on the new version, Mikhail Messerer followed the mood set by the ballet’s creator.

A room in a wealthy house. Early evening. Two girls are embroidering a silk scarf. These are Cinderella’s stepsisters, who are getting ready for the ball at the Prince’s palace. The stepsisters are chatting by the needlework; their mother admiring them, while Cinderella is sitting alone by the fireplace as usual. Cinderella’s stepmother does not like her and has reduced the girl to a scullery maid. Quiet needlework does not last long: the sisters start a row about the scarf. Suddenly an old beggar woman comes asking for alms. The stepmother and stepsisters drive her away, but Cinderella offers her some bread. The old woman casts a gentle look at the kind girl and disappears. The dance master arrives with his violin to practice some dances with the stepsisters, in preparation for the ball. At last, everything is ready. Cinderella’s stepmother and stepsisters set off for the ball, and she is left sad and alone. If only she could wear beautiful dresses like her stepsisters do... But who will make them for her? Cinderella recollects her late mother, looking at her portrait. She dreams of the ball at the Prince’s palace. The beggar woman reappears and reveals herself as a Fairy. She takes Cinderella far away from her grey, everyday existence to an enchanted realm of beauty and fantasy high up among the stars, where the fairies of Spring, Summer, Autumn, and Winter come, and each offers her their season’s gift. Cinderella rides away to the ball in a luxurious carriage.

The ballroom at the palace. The guests are dancing a ceremonial court dance, and among them appear Cinderella’s stepmother and stepsisters. Everybody is anticipating the Prince’s arrival. Finally, he enters the ball and commands everyone to continue the dancing. At this very moment, Cinderella arrives, and the guests cannot take their eyes off her. She is so beautiful that everyone takes her for a princess; even her stepsisters fail to recognize her. The Prince is charmed by her beauty. But Cinderella’s heart is captured, too. The guests disperse and the Prince and Cinderella, left alone, declare their love for each other. The waltz resumes and, caught up in the dance, Cinderella forgets the Fairy’s warning. But the old clock reminds her: «It’s time, Cinderella!». «It’s time!» — the pendulum pounds relentlessly. The clock strikes midnight and Cinderella rushes from the palace, losing one of her slippers on the stairs. She has no time to pick it up. The Prince chases her. Where is the beautiful stranger? Dismayed, the Prince picks up the slipper and vows he will find the girl he loves.

The prince has lost his peace of mind; he orders the owner of the slipper to be found. All the best shoemakers of the kingdom are gathered, but nobody knows who has sewn the slipper. The prince decides to find the girl himself. In search of her, the Prince travels around the world. He meets many beauties, but the slipper doesn’t fit any of them. Disappointed, he returns home.
Cinderella’s room. She is sleeping holding the slipper close to her heart. A sunbeam sneaking into the window awakens the girl. Looking at the slipper, she reminisces about the wonderful events of the memorable night: the ball, the golden carriage, the Fairy, and the beautiful Prince.
A crowd is running along the street. Everyone is excited: the Prince is arriving. He is still looking for the girl who has lost her slipper at the ball, whom he declares he will marry. The Prince is exhausted by his long, unsuccessful search, but he is still full of hope. The girl may be nearer than he expects...
Cinderella’s stepsisters and stepmother bow to the Prince: they also try the slipper on, but it is too small for any of them. The stepmother decides to cut off her big toe in order to put the slipper on. The Prince notices Cinderella, who is standing aside. Suddenly she drops a slipper — identical to the one that the Prince found on the stairs of the palace. Cinderella’s stepmother and stepsisters are astonished. The Fairy appears and gives her blessing to Cinderella and the Prince.
Cinderella and the Prince find themselves in a wonderful garden. They start a long and happy life together.