❗In accordance with the new version of Decree No. 121 of the Government of St. Petersburg, from October 30, 2021, until the restrictions are lifted, when visiting the theater, it is necessary to present a negative result of a PCR test taken not more than 24 HOURS BEFORE THE START OF THE PERFORMANCE. X 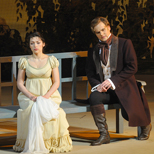 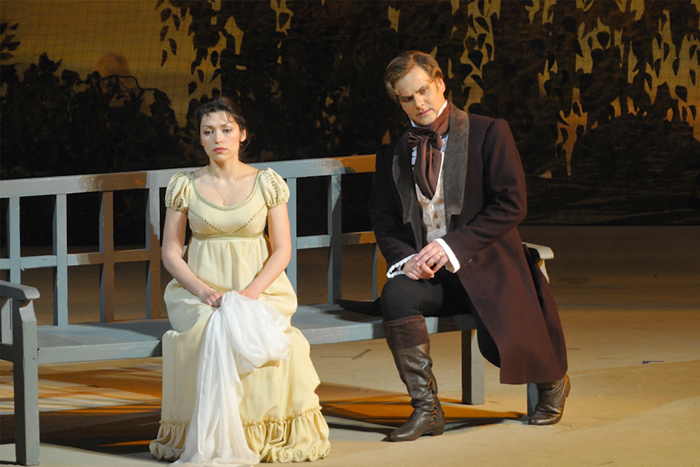 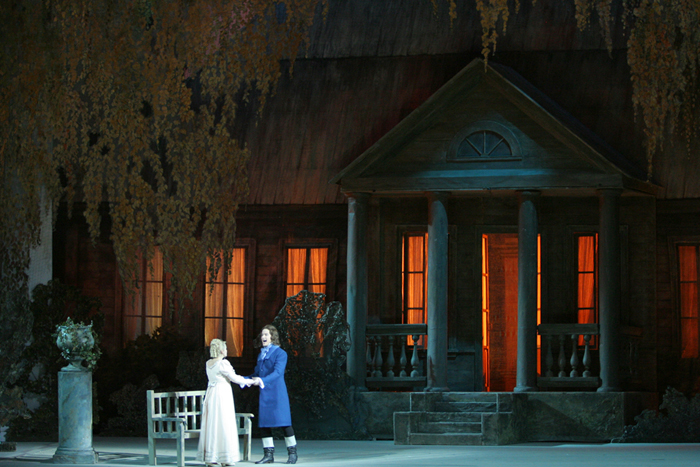 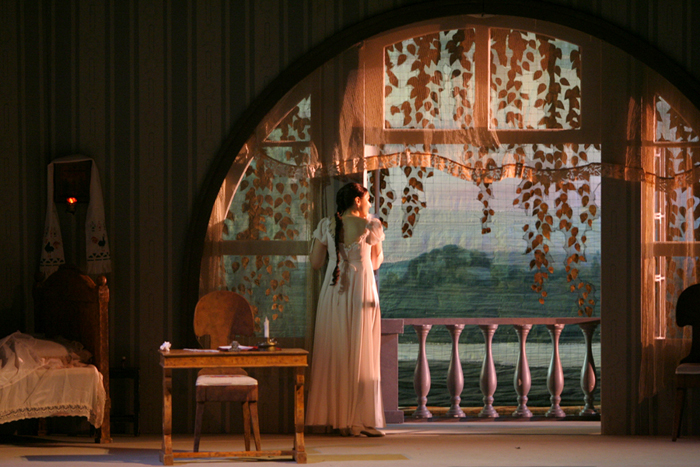 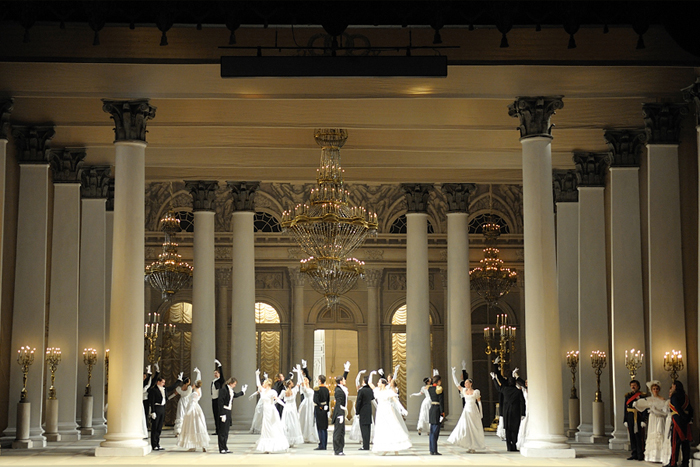 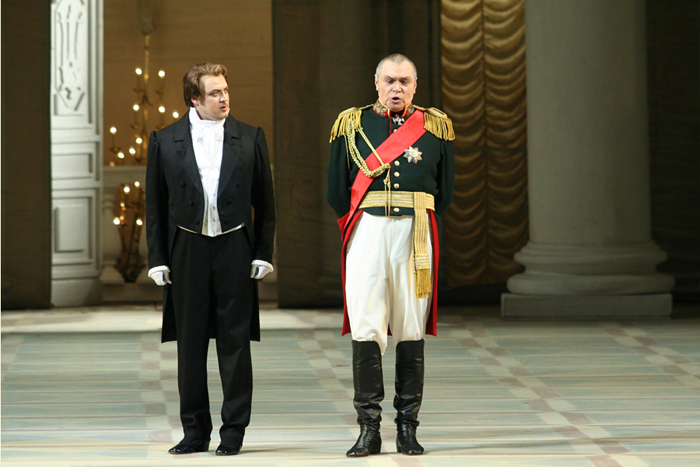 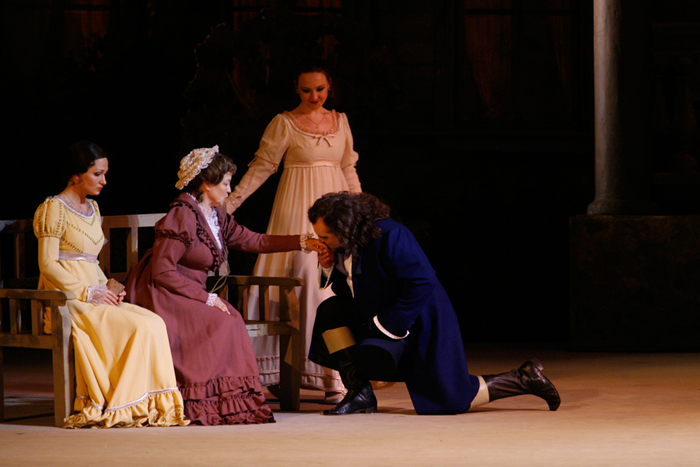 Act I
Scene 1
The Larin family estate. Mrs Larina’s daughters can be heard singing in the distance – Tatiana, always thoughtful and dreaming, and Olga, playful and flirtatious. Their young voices remind their mother and the nurse of a now dim and distant youth.
Evening falls. Long drawn-out singing can be heard; the harvest complete, the peasants bring their mistress a decorated sheaf of wheat. Unexpectedly guests appear – it is the young poet Lensky, Olga’s fiancé and the Larins’ neighbour, and Onegin, his friend and a man of the world. He has recently arrived from St Petersburg and is already bored with the country. The arrival of the guests creates confusion. Everyone looks at the new arrival with interest.
Onegin is surprised at Lensky’s choice of bride: “If I were a poet like you I should choose another.” Tatiana is deeply perturbed by her meeting with Onegin. Once alone with Olga, Lensky declares his love for  her.

Scene 2
Tatiana’s bedroom. It is night. Tatiana is overflowing with the new emotion that has gripped her. In vain, Filippevna the nurse attempts to dispel Tatiana’s pensiveness by telling her about days gone by. All her thoughts are of Onegin; he has stirred the heart of this provincial girl. Tatiana asks her nurse to leave her. Absorbed by this new passion, Tatiana writes to Onegin. She believes him to be the man fate has chosen for  her – “You appeared to me in a dream, unseen, and were dear to me…”
Gradually dawn begins to break. A shepherd’s horn blows. Tatiana begs her nurse to deliver Onegin the letter.

Scene 3
A distant corner of the Larins’ garden. The voices of servant girls are heard as they collect berries. In confusion, Tatiana runs in. Trembling, she awaits the answer to her own confession of love.
She is gripped by agonising regret: “Oh, why did I heed my wretched soul, unable to control myself, why did I write that letter?” But it is too late. Onegin is already here, in the garden. His words for m, cold and passionless. He is touched by Tatiana’s openness, but cannot return the feeling. Civilly returning Tatiana her letter, Onegin reproaches her lack of care: “Learn to control yourself; not everyone would understand you like I; inexperience leads to disaster.”

Act II
Scene 1
A ball is being held at the Larins’ house. Many guests have come to celebrate Tatiana’s name-day party. Triquet, a Frenchman, sings some couplets in Tatiana’s honour. Onegin is driven to utter boredom with the provincial ball and its gossip and idle chatter. He blames Lensky: “Why did I come to this ridiculous ball? Why? I shan’t for give Vladimir for  this!” Onegin begins to pay court to Olga. Lensky is indignant at his friend’s behaviour and his fiancée’s coquettish and frivolous manner. During a mazurka, a quarrel develops. Insulted and in a fit of rage and despair, Lensky challenges Onegin to a duel. The guests try in vain to reconcile the two friends.

Scene 2
A cold frosty morning, and Lensky has come to the place where the duel will take place. “What does the coming day hold for  me? I can’t imagine what will be…” Sad and pained, he thinks of the forthcoming duel. Zaretsky, Lensky’s second, is awaiting Onegin. Onegin finally arrives; the preparations for  the duel are made, but the former friends tarry. Both understand the absurdity of what has happened: “Should we not laugh before our hands are stained with blood, and part as friends?” But no! The seconds show the two adversaries to their places. Zaretsky gives the signal to start. There is a shot. Lensky falls. Running to his friend, Onegin is horrified to see he is dead.

Act III
Scene 1
Guests are assembling for  a ball at a mansion in St Petersburg; Onegin, home from his travels around Europe, is there too. Neither changes of scenery nor high society have lifted his anguish. Prince Gremin and his wife arrive and Onegin recognises her to be Tatiana. The Prince cordially tells him of his happy marriage and introduces Tatiana. Onegin is staggered – surely this noble and refined society lady is not the same girl to whom he once read a moral admonition? Onegin uneasily admits to himself: “Alas, there’s no doubt, I’m in love, in love like a boy, a passionate youth!”

Scene 2
The last encounter between Onegin and Tatiana. His words are full of confession and repentance. But the past cannot be revisited. Calling on Onegin’s honour and pride Tatiana asks him to leave her: “to another by fate have I been given, I will never leave him.” Onegin’s entreaties are in vain. Ultimately he understands that he has lost Tatiana for ever. He is left alone: “Ignominy! Anguish! Oh, my pitiable fate!”