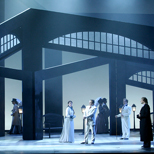 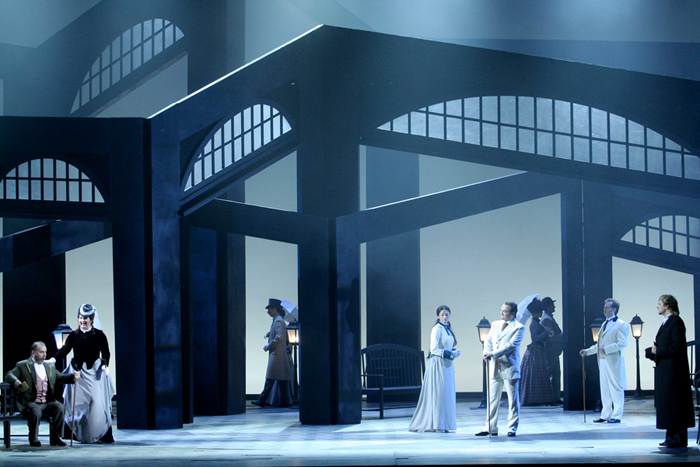 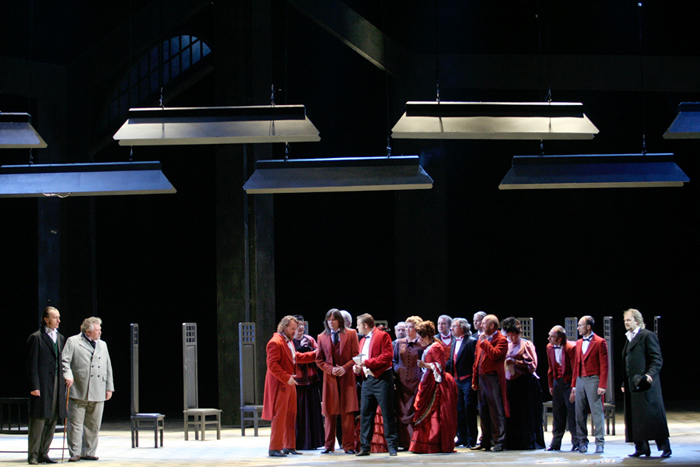 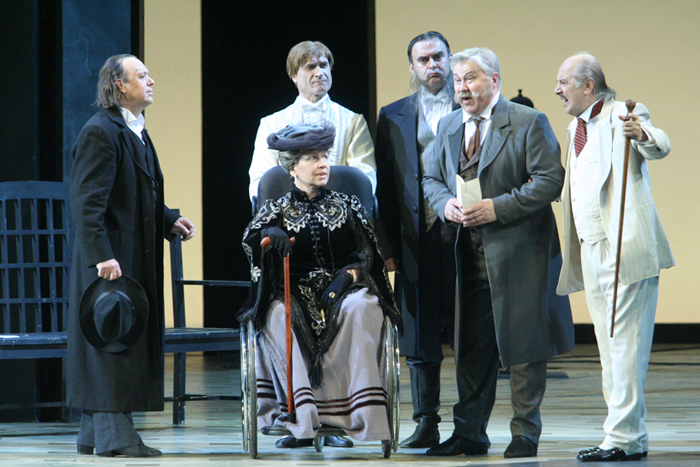 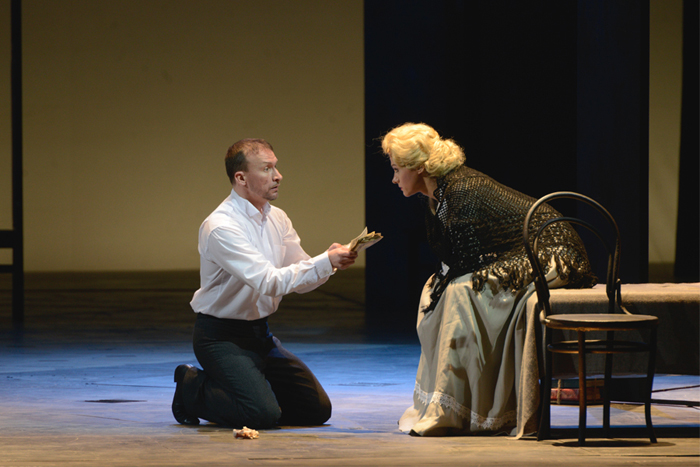 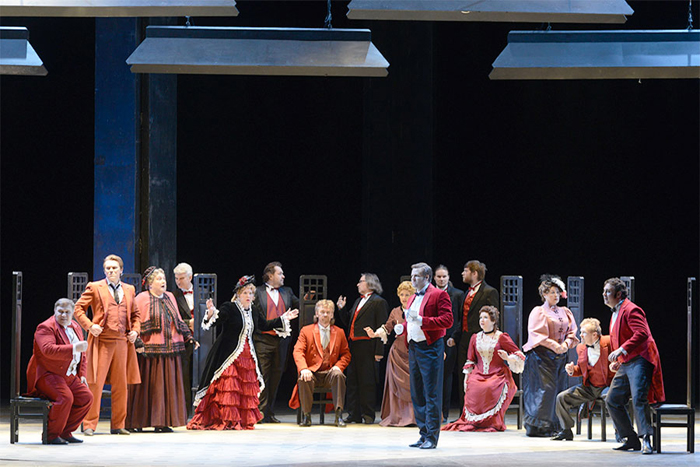 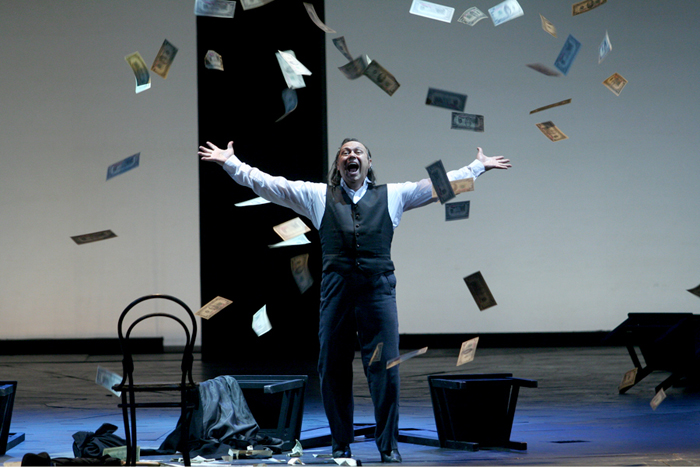 The action takes place in the mythical European town of Roulettenburg, where the opera´s characters meet. Alexei is travelling with the family of a Russian General as tutor to his children. The General is deep in debt and hopes only on the rich inheritance from his dying grandmother. Alexei is an inveterate; he in love with Pauline, the General´s step-daughter.

ACT I
The garden of a large hotel in Roulettenburg
Pauline is speaking with Alexei in sharp tones. She had given him her diamonds to pawn and win for her at roulette. She was hoping for a big win, but Alexei lost everything. Hiding her worry, Pauline departs.
The General appears along with Blanche, the Marquis and Mr Astley. Alexei hands the General a telegram informing him his Grandmother is seriously ill: her days are numbered. The General´s joy, poorly concealed by his hypocritical grief, if underlined even more by the merry tone of Blanche and her compliments to her noble cavalier. Blanche, teasing Alexei, notes he is saddened at the loss of three thousand guldens. All are amazed: where did he get such money from?
In answer to the moralising statements of the General and the Marquis, Alexei speaks contemptuously of the middle classes who save money from one generation to the next in order to ultimately have some respectable family capital. "No, that goes too much against my Tatar blood!" he challengingly declares. The General, the Marquis and Blanche depart. Astley says that he likes Alexei´s reasoning and, leaving, asks him to visit later.
From Pauline and Alexei´s dialogue it becomes clear that she has long known of his love for her. Alexei is basically convinced that sooner or later he will have a major win and then he can help Pauline. But Pauline is haughty towards him. In passionate anxiety, Alexei speaks of the madness to which his love has driven him: "Do you know, I´ll kill you one day... It´s dangerous for us to be together? I have been drawn to kill you many times, disfigure you, strangle you." He is ready to jump into an abyss for her sake, but Pauline answers that it is all "completely useless" to her.
The Marquis, who has lent the General money, takes a promisory note for a sum twice as large. Humiliated, the General thanks the money-lender.
Pauline asks Alexei if he would kill someone on her order. He replies in the affirmative. But Pauline is only joking and makes Alexei approach the fat and highly influential Baroness Wurmerhelm, bow and say something in French. She hopes the baron will beat him with his cane for so doing. Inwardly indignant, Alexei nonetheless fulfils his mission.: he approaches the Baroness, bows and says some awkward phrases in French and German, rousing the Baron´s fury.

ACT II
The General is "reading the riot act" to Alexei for his rudeness to the Wurmerhelms and wants to throw him out of the house, but the indignant Alexei replies that he himself will demand satisfaction from the Baron the next day. Downcast by the thoughts of a new scandal, the General asks for help from the marquis.
Mr Astley tells Alexei that the General is afraid of a acandal because of his impending marriage to Blanche. "Granny in Moscow will die, the legacy will be announced, the General will marry, the debts to the Marquis will be repaid," he says of the General´s plans. But Alexei is certain that there is more to the matter: "No, that little marquis is also awaiting the legacy, because Pauline will get a dowry, and once she has the money she will throw herself in the arms... in the arms of that money-lender!"
Alexei´s passionate speech is interrupted by the arrival of the Marquis who tries to cajole and threaten him not to continue the scandal with the baron. Seeing that Alexei is inflexible, the Marquis gives Alexei a letter from Pauline ordering him to put an end to the whole thing. Alexei agrees, surprised that Pauline has fallen under the power of the Marquis. Blanche and the General are happy that the unpleasant matter has been dealt with.
Unexpectedly Grandmother is wheeled into the hotel on her chair. All are stunned, as if they had seen a ghost. But Grandmother is energetic and in good spirits. She sees straight away what sorts the Marquis and Blanche are, and turns heartfeltedly only to Alexei and Pauline. She declares that she wants to see everything here, including the roulette table. "But I won´t be giving you any money," she declares decisively to the General.

ACT III
In a small lounge next to the gaming room the General is pacing up and down, unable to sit down: Grandmother has being enjoying the roulette and nobody can tear her away from the gambling table. The perturbed Marquis enters with the news that the old woman has already lost forty thousand and right this minute is selling her shares. Hysterically, the General declares that Grandmother needs looked after and she should be sent to an asylum. Mockingly Blanche calls the General an old beggar, and a quarrel flares up between them. All three humbly ask Alexei to exert his influence on the old woman and make her give up play.
Prince Nilsky enters and announces that Grandmother has lost about one hundred thousand. The General and the Marquis run into the gaming room, and Blanche starts to flirt with the elderly Prince. Alone, Alexei dreams of Pauline. When she appears, Alexei asks why the Marquis is not with her, to which he receives the strange reply: "Because he Потому что он подлец". Alexei again reminds her that now that the dénouement is close he can do her any service at all.
Grandmother is brought in, she has lost all her money. But she still has another two or three villages and two houses. The old woman asks Pauline to come and live with her, but Pauline thanks her and declines, saying she cannot give an answer right now. Grandmother is carried off. When the General wishes to enter her room Potapapitsch him: "not allowed". The General is filled with gloomy thoughts: he is ruined, his wedding is in ruins, Blanche has left him for another and the accursed old woman is to blame for everything.

ACT IV
Scene 1
Having taken the Grandmother to the station and returned to his tiny chamber, Alexei is surprised to see Pauline there. The girl shows him a letter left by the Marquis. The latter has already dealt with the sale of the property left to him in security by the General, and has rejected "sweet hopes" of happiness with Pauline; the Marquis also "overlooks" the General fifty thousand as this was Pauline´s money...
"With what happiness would I throw all that damned money in his face!" Pauline exclaims. Alexei agrees that they must "answer the scoundrel with the return of his low money", but where is it to be got?
And suddenly he has a wild thought: it is Fate, he must try his luck; Pauline must wait here and he will return... And like a madman Alexei runs from the room.

Scene 2
A brightly lit room
The gamblers are swarming around the roulette table, engaged in play. Alexei places his bets and wins time and time again. When his winnings come to sixty thousand the croupier closes the table. Alexei and the crowd flushed by his success move to another. A feeling of general disquiet. Alexei is considered beside himself, possessed. The second table, too, is closed as Alexei has won all the money. He moves to the next room. The cries of the ecstatic gamblers can be heard. The win comes to two hundred thousand, but experienced people understand that Alexei is on the brink of madness.
"We´ll meet him tomorrow," remarks the croupier.
"He won´t leave now," adds the roulette supervisor, "he is doomed…"

Scene 3
Alexei runs into his tiny chamber and throws the parcels of money on the table without seeing anything around him. He hears the voices of the croupier and the gamblers...
Pauline observes him in silence for a long time. And when, suddenly seeing her, he offers her the money to give to the Marquis she laughs at him evilly and refuses to accept it. Alexei is surprised. "You, my friend, pay too dear," Pauline says sharply, "the Marquis´ lover does not cost fifty thousand." And she bursts into hysterical tears. Alexei manages to pacify her with difficulty. There is a moment of enlightenment; both try to believe they can be happy together.
But suddenly Pauline again demands her fifty thousand and, once she has it, throws the money in Alexei´s startled face and runs away. He is left alone, stunned and perplexed.
Out of nowhere a mad smile creeps across his face, and he advances towards an unseen roulette tabel: "Who would have thought... It came up red twenty times!"